New York City - At an event to promote her book 'Brave', Rose McGowan has a passionate argument with a trans woman, Andi Dier. 31 January 2018
Andi starts her speech by saying: "I have a suggestion. Talk about what you said on RuPaul. Trans women are dying and you said that we, as trans women, are not like regular women. We get raped more often. We go through domestic violence more often."
Interview with Andi Dier following the incident: www.them.us/story/rose-mcgowan-broke-down-in-a-transphobic-rage-last-night
Another: www.thedailybeast.com/trans-activist-who-confronted-rose-mcgowan-would-do-it-again-but-better
Video credits (Instagram): ur_werst_nightmare & connybschnall 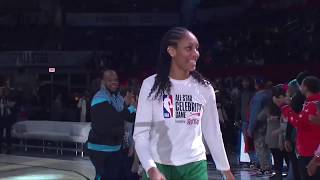 Stephen A. vows to bench players in the All-Star Celebrity Game, gets taunted by Common | First Take

Funniest Celebrity Moments Ever! Try Not To Laugh (compilation 2019)